"It is better to be lucky. But I would rather be exact. Then when luck comes you are ready."- Ernest Hemingway

*There will be spoilers in this post*
The Old Man and the Sea disguises itself as the saga of a fisherman at sea. The book in itself is treacherous as it attracts the reader to something that seems like a very easy read but in the end shows to be much more complex than you could've ever guess. From simple themes such as light and dark to showing human flaws the story forces you to scrutinize every single word, for if you don't you might miss something.
One of the major motifs in the book is pride. Now, we all know that this has its pros and its cons. Santiago has it and for most of the book that gets in the way of asking for help or even doing the right thing. We see this within the first 30 pages of the book, where even though he knows he needs four, he only accepts two sardines from Manolin. He also acknowledges that he shouldn’t be out too far in the sea by himself and rejects the boy’s offer to accompany him. You see him subconsciously regret this decision as he repeatedly and randomly says “I wish the boy were here”. This ends up heavily jeopardizing Santiago’s own life as he has to face several sharks out in the middle of the gulf with close to nothing to battle with. He also makes Manolin cry with relief when he finally makes it back to shore and the coastguards had a search party out for him. Santiago’s pride in the end just makes him seem reckless and even selfish. On the other hand, one could argue that he just doesn’t want to be a “beggar”, depend on someone - and that is definitely a good thing or simply finds this the best way to hold on to who he was before. While he is out at sea he remembers the time when he arm wrestled with another guy who was supposed to be very strong for two days straight and beating him in the end, he later says that he won because he believed he could and that was all. This would back up the fact that he doesn’t want entirely accept he is no longer that person. It is totally okay to want to be independent and to be strong in other people’s eyes but Santiago is an old man, he is all alone and can’t even catch a fish anymore so maybe it’s time for him to lean on someone.
Light and dark also happens to be a very common theme throughout, sneakily weaving itself into the crucial parts of the story. For example, right as he is leaving the docks there is a bird circling overhead - which is a pretty good sign. See a circle is also a halo, and angels have halos, so the animal is technically creating a circle of light. The bird also helps him know where the fish are because when a bird flies in a circle it usually means that they are going to dive for prey. The sun is also rising at this time and the water looks light. The marlin that he is after also begins making circles around the boat before Santiago finally clubs it(page 89-95). 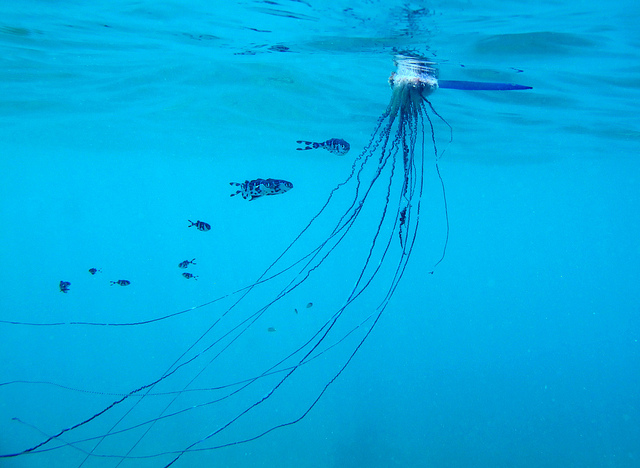 Agua mala is a Portuguese man-of-war jellyfish that pretends to be an anemone to attract fish and eat them. They disguise themselves as something they're not to survive. Likewise, Santiago uses the bait in the hooks to get fish. In his eyes he isn't doing anything wrong but when he speaks of the agua mala doing exactly the same thing and how happy he is that the turtles eat them for their treachery, he becomes quite judgmental(page 36). Now, once he successfully clubs the marlin, he knows that he has tricked the fish, and he knows that it was wrong to do so but in the end he had to in order to make a living for himself. The jellyfish does this because it's the only way it will effectively feed and stay alive. This gives evidence that he is, well, a hypocrite. Santiago's betrayal does have consequences though. The dead marlin attracts sharks that end up devouring it and leaving the old man with even less than what he had. Basically, karma happens.  Lastly I'd like to address the title of this post. In the book Santiago repeatedly claims that men are very lucky for having to battle animals rather than the moon or the sun. However, he is very precise about the way he sets the lines to catch fish. We know that it has been 84 days without him being able to catch a fish, but he keeps going back. If he solely believed in luck to catch fish he would've given up a long time ago; he obviously doesn't which means he trusts his skills and so he continues to try. The scars on his skin are proof of the hard work he has done his entire life. The people around him think he is unlucky. Santiago obviously believes there is such a thing as luck, so what would the answer to this question be? It's both. They go hand in hand, because you won't be lucky forever, and there are times when precision is going to be your best friend and other times when it won't. It's like not studying for a test and still acing it or studying all night and failing it. It's life.
Santiago is a human being. He is a relatable character with multiple flaws and a life like any other person.
The Old Man and the Sea

Popular posts from this blog

In this piece, David Denby, a film critic for the New Yorker, writes about the common tropes in teen movies and what is hiding behind this eccentric genre. As a seasoned writer, he is able to captivate the reader through various use of imagery and diction, both of which build the pathos, logos, and ethos from the ground up.
Right off the bat, we see this bubbly and obnoxious imagery used to portray his first subject, the queen bee. With similes like “with a waist as supple as a willow”, and “they are like the wicked princesses,” he is able to conjure quite an image in one’s head.  The silliness and accuracy of these descriptions contribute greatly to the humorous tone the text takes on over the first three paragraphs.
The pathos also begins to build here slowly, this is done through the obvious jokes and the instant connection as it is very likely that anyone who reads the article would have watched at least one teen movie that fits these stereotypes. Not to mention that, much like the…
Read more

If the Japanese can't build a safe reactor, who can? - Rhetorical Analysis 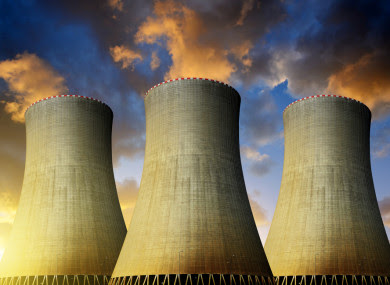 At first glance, Applebaum’s editorial seems to be an informative piece meant to describe the then-recent environmental and almost-nuclear disaster. However, after taking a closer look, the article becomes a plea to international agencies to put a stop to the “nuclear power renaissance.” She is able to make an argument through the continuous use of harsh and sentimental language when speaking of the present disaster and the possible ones, but she is also able to alleviate her claims by praising Japan and other countries at the forefront of the nuclear power industry. This is why, in part, the article can be misleading. Considering this is an opinion piece, it is lacking in credibility but since the events she references were widely covered and known, it can be assumed that her stance is credible. Additionally, when she references politics, Applebaum changes the tone of the text from passive and informative to urgent and almost aggressive.
Within the first paragraph, Applebaum …
Read more

March 18, 2019
2. Write two contrasting pieces (300–450 words each), the first about a place before a flood and the second about the same place after a flood. In your writing create a mood and a sense of place.

The young girl’s eyes startle open at the sound of thunder. She lays still on the right side of her bed, waiting to hear a curtain of water hit the roof. But it never comes. Through the rectangular glass windows atop the double wooden doors that opened into the patio, she could see the bright blue of the sky laughing at her uneasiness. Within seconds she hears it again, the hairs on the back of her neck rising as the sound crackled through the air. It was a lot closer than before. With worry coating her face, the girl got up and went to find the source of such a sound, after all, she was not going to fall asleep again anytime soon.

Her feet met the cold white tiles of the floor, sliding back and forth as she searched for her worn out flip-flops. After a couple of seconds of blindl…
Read more